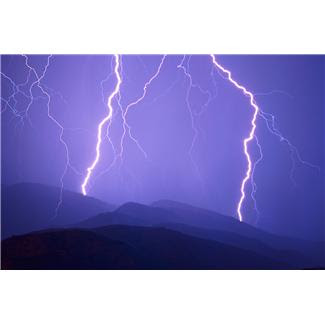 He was thirty years old.
Well-educated, articulate, up-to-date with history and current events, well-versed in foreign affairs, he was nonetheless an oddity. Forced into exile by a conquering nation, he lived thousands of miles from home and everything was unfamiliar – the language, cultures, and religion were all different. Still, he married and settled down, trying to make the best of circumstances.
Four years into it, everything changed. Standing by the banks of the Kebar River with other exiles, he suddenly spotted a towering windstorm to the north, with an immense cloud, scattering lightning bolts.
In amazingly vivid prose, Ezekiel went on to describe a vision of heaven and a conversation he had with God. It is wild and crazy, and hard to even imagine. What caught me this week were some lines in chapter 2 of Ezekiel. The first thing God said to this exiled man was: “Son of man (human), stand up on your feet and I will speak to you.”
Wow! Imagine the Creator telling you to “Stand up and I will speak to you.”
Next the Creator told Ezekiel that he was sending him with a message to his fellow Israelites. “And whether they listen or fail to listen –for they are a rebellious house—they will know that a prophet has been among them.”
God went on to tell Ezekiel three times, “do not be afraid…” ending with “Do not be afraid of what they say or terrified by them…”   … “You must speak my words to them, whether they listen or fail to listen… But you, son of man (human), listen to what I say to you.”
The conversation between Ezekiel and the Creator of the world continued for several more chapters, but I am still processing the first part of this interaction.
It intrigues me that Ezekiel – can I call him Zeke? It intrigues me that Zeke is a God-follower, but hasn’t been in ministry or anything up until now.
To recap… at age twenty-six he was swept away to a new land, uprooted to a new, unfamiliar situation. Out of his element, he strived still to follow his God in a foreign land, surrounded by people of different beliefs and ways. Praying alongside other exiles at the river, he suddenly encountered God in a brand new way. Loud, audible, visible with unimaginable creatures, lights, colors, and storms, Zeke heard his God speaking to him, drafting him into a wild assignment with his God.
Earmarks of this were:
-four years into living in an unfamiliar area, God started something big and different with Zeke, calling him into service
-it might seem scary
-don’t listen to what naysayers would tell him; only listen to God’s words
-speak God’s words
-their response was not his responsibility; his obedience was
-a result: they would know that a prophet of God had been among them
While God hasn’t spoken to me out of a windstorm, this still convicts me. Am I taking in God’s words to me (the Bible, prayer, etc.)? Am I speaking out his truths even if the results could be scary? More convicting still, do people see God’s voice and presence in me, knowing that a God-follower was among them?
I’m linking with Ann and Michelle today in thanking God that:
-he speaks!
-his Word (the Bible) is captivating and alive
-that he can use all of us to speak his words to the world around us, to share his love for them
-that he can grab us out of whatever setting he finds us in and draft us into wild assignments
So, what surroundings have you been in for the last four years? Is it odd to think of God calling out to you during a normal prayer time with him and giving you a vivid assignment? Do you sense him doing that now or have you felt that before?