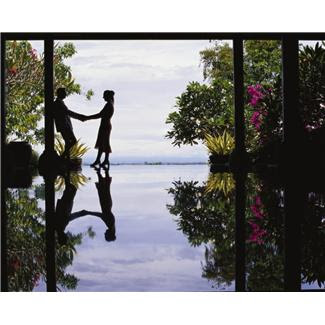 One of the Saddest Lover Scenes

It was like the ultimate lover betrayal.
He walked through their rooms, seeing evidence of the Other Lover – of him who had grabbed her heart—everywhere.
At the North entrance to their home stood a sculpture carved with the Other’s face. “This was my yard! How could it be here?” It felt like a slap in the face.
Inside the courtyard, there was more. Plastered all over the walls were pictures of the Other, and of their activities together. There was more evidence further in: just inside the doorway, in rooms deeper in, and finally in the most intimate room of the house…
He asked Zeke in his sadness, “Do you see this? Do you see what she has done?”
That day, he moved out. It was September 17, 592 BC, and God moved out of his house, the temple. It is one of the saddest lover scenes in the Bible. Spread over three chapters, God’s glory moves sadly, slowly out of his temple, and away from his people, his bride. You can see him lingering at each threshold, each new boundary.
8:4 “And there before me was the glory of the God of Israel, as in the vision I had seen in the plain.”
9:3 “Now the glory of the God of Israel went up from above the cherubim, where it had been and moved to the threshold of the temple.”
10:18,19 “Then the glory of the Lord departed from over the threshold of the temple and stopped above the cherubim. …They stopped at the entrance to the east gate of the Lord’s house and the glory of the God of Israel was above them.”
11:23 “The glory of the Lord went up from within the city and stopped above the mountains east of it.”
Can you just see a lingering Lover slowly tracing his steps out of an empty house? From deep within the Holy of Holies room, to the outer courts, to the far entrance, through the city – his city—to the mountains surrounding Jerusalem, where he pauses for a final lingering look. In his final eastward departure, he stopped over the Mount of Olives.
“I will gather you up. I will bring you back and restore you… I will give them an undivided heart and put a new spirit in them. …I will be their God,” he tells Zeke, but he’s talking to his Beloved.
There are about four hundred years of silence that follow these prophets’ books. The Old Testament ends, but there are rumors and prophecies of God returning someday, and of a new way to have reconciliation with their God in the future.
History hangs in the balance. Ancient emperors and conquerors rise and fall, their exploits documented before and after. Persians, Greeks, and Romans dash across the screen.
Then in a quiet cave-stable, around 6/5 BC, a man-child is born and grows up. Thirty-some years later, the Carpenter’s Son – Jesus the God-Man—stood up in the temple, read his job description out of a passage in ancient Isaiah, and said, “Today this scripture has been fulfilled in your hearing.”
John 1:14 sums it up perfectly. “The Word became flesh and made his dwelling among us. We have seen his glory, the glory of the One and Only, who came from the Father, full of grace and truth.”
Colossians 1:19 says, “For God was pleased to have all his fullness dwell in him, and through him to reconcile all things to himself…”
A Lover with a plan, with reconciliation on his heart. In 592 BC, he left, but he was biding his time. In the early AD’s he returned to announce his plan and again declare his love. Then he left to prepare a new home for his Bride.
When he returns again, guess where he will first step down? On the Mount of Olives, to gather up and restore.
Hi friend. Thank you for joining me as I study through these chapters in Ezekiel. Seeing God’s passionate, determined heart for his Creation rekindles a flame in me. What does it do in you right now?