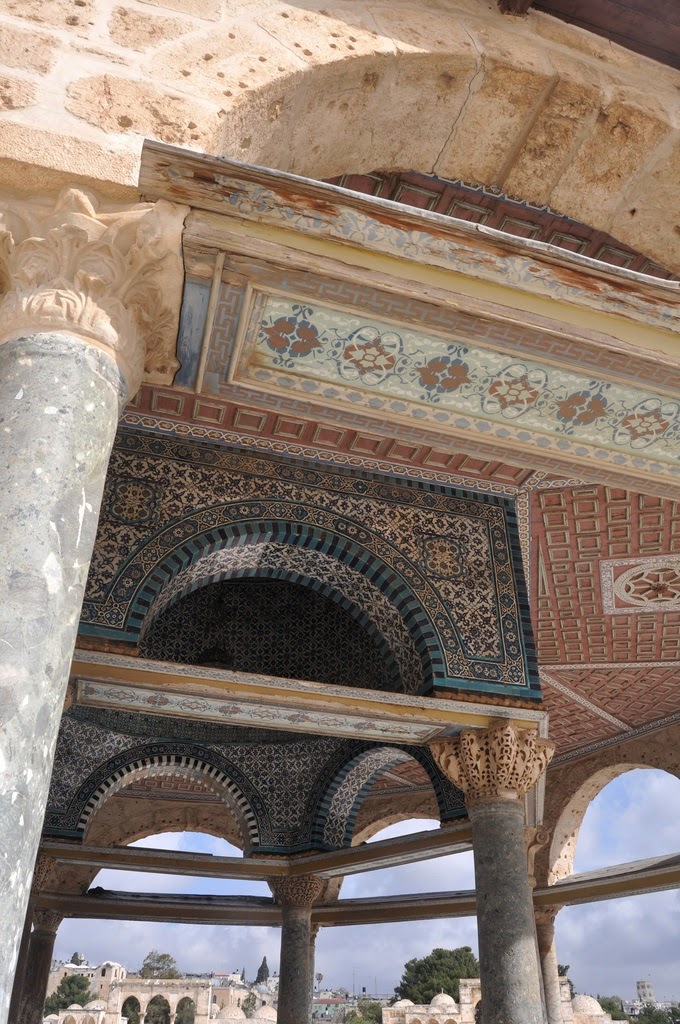 Every day he went to the Gate Beautiful. And I don’t know if he felt beautiful, but I know that he pulled his withered legs closer to him on the braided mat and he stared out. At the passing people who didn’t see him, at the passing people who tried not to see him, he stared blankly and made his speech. Under towering columns, he lay low, and he begged for small coins.

Coming to his corner, Peter and John, nimble-footed fishermen accustomed to rolling waves as well as dusty Roman-occupied lands, saw him there. He who may not have felt beautiful under the Archway named for Beauty.

And he, who wasn’t used to being seen, was suddenly seen. Peter looked straight at him, as did John. Peter said, “Look at us!” and the man gave them his attention, expecting to get something from them.

I am reminded of this historical account and I play it over and over this afternoon as I chop thick rose and green striped stalks of rhubarb, layering them under sliced peaches and ripe strawberries for a summer dessert.

At a recent art exposition, I stood entranced beside a table in the back center of the crowded room. The artist stood there silent and proud with nothing to prove as I paged through his two or three sketchbooks and I was mesmerized. In the styling of Da Vinci or Michalangelo, this artist dated his pages and then filled them with moments captured in time: weary-looking women hunched over coffee cups, ball-capped men dozing on bus benches, and fragments of familiar faces appearing regularly through the pages, here they are lounging on a couch, here they flick a cigarette and glance at him. Ordinary moments frozen in pencil and time. The commonplace is suddenly intimate and beautiful, stolen peeks into lives and stories.

“I’ve never seen an ugly person,” he says, this artist at whose table I’ve lingered. In response to my delight at his drawings, he states it again, “I don’t believe anyone is ugly. And I don’t mean this as a cliche,” he laughs. “Everyone is interesting in their own way. It’s just attitudes that are ugly.” I nod in happy agreeing.

His characters are lined in thought, in age, in shadows, and he starts into a story. “I came across this man who had warts and growths all across his skin, even tapering out to claws on his hands,” he explained, “and I couldn’t look away. It was so unique, beautiful in its own way. I could have drawn him for hours.”

Back in Middle Eastern Bible times, Peter and John have captured the sitting man’s attention, and he turns expectant. Underneath the Gate Beautiful, he awaits a token coin or two.

“I don’t have any money,” Peter began, “but what I have I’ll give you. In the name of Jesus Christ, stand up and walk.” Taking him by the right hand, he helped him up and instantly the man’s feet and ankles became strong. He jumped to his feet and began to walk. Then he went with them into the temple courts, walking and jumping and praising God. When all the people saw him walking and jumping and praising God, they recognized him as the same man who used to sit begging at the gate called Beautiful, and they were filled with wonder and amazement at what had happened to him.

Tapping my screen to hear this audio text read again and again aloud to me as I mix in sugar, flour and baking soda, I hear these words repeated and it hits me.

“What I have … I’ll give you.” To the people sitting hopeless under signposts flashing gaudy hope, to the people feeling lonely under facebook statuses blatant in aloof anger, and to silent hovering teens with screaming eyes.

“What I have, I’ll give you!” And it may be to cry out to the God who does the miraculous. He can and does still heal. True stories echo in my ears from sources I trust and believe, and I’ve seen God do that too, in astonishing answers to prayer from small private rooms.

And suddenly, I have to stop mixing. Running to my room, I kneel and pray, feeling slightly silly next to a mountainous pile of clean laundry in my room in the dark on a hot summer afternoon. But He’s brought a name to my mind, so I stumble words, cry laughing in the dark, and burst into praise about how big our God is, swiping tears and laughing in shy love to Him. I pray for healing for this friend, feeling at once weak in faith and yet incredulous with excitement to the God who says, Ask me. So I do, and I confess that all too often I have labeled God in a tiny box and prayed pitifully-small safe prayers. I wipe tears and smile silly still, admitting that I too easily forget, am too prone to miss his wonders, and too easily distracted to notice his answers to prayer. His love is towering, and I kneel low beside the bed, and he whispers beauty to my heart. It is liberating, exuberant.

After a while, I slip back into the kitchen, resume the audio play, and wipe up the rhubarb and strawberry spills from the counter.

What you have, what you can freely give, may be different for each person. Some friends need you to walk boldly into God’s throne room, and say, “Abba Dad, remember Peter and John’s experiences with the man at the gate? You tell us to ask, so here I am…”

Other friends simply need us to tell them they are beautiful, and not alone, and that they have value. They need us to speak words of emotional healing, or to spend tell-tale time with them that translates into relationship in language they hear. Type a private message to the one needing to know they are seen, or text a note to a friend who needs you.

“What I have, I’ll give you. May I introduce you to the God who crafted and made you, who calls you by name?”

And this God who slips up beside us too, as we huddle at the Gate Beautiful on those days when we wonder too, says, Look at me. Turning, we look, expecting small things, and He does the miraculous.

The story of the man at the Gate Beautiful? It ends with a simple line, “For the man who was miraculously healed was over forty years old.” And for some reason, that hits me too tonight.