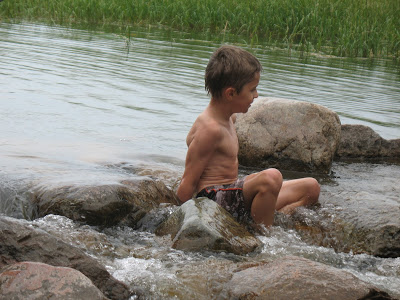 When You Find Yourself Red-Faced and Hot at the Woodfire

In between sticky smores, sandy swimsuits, and splashes in the crisp Mississippi River headwaters, it washed off: the weight of everyday life. Hamburger hobo stews wrapped in tin foil oozed steaming carrot and potato juices. We smelled of wood fires and mosquito repellent. 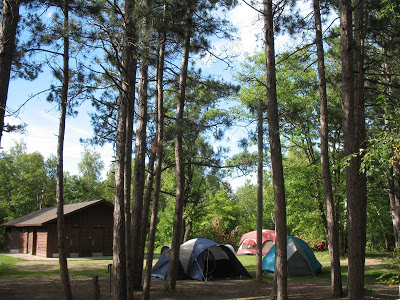 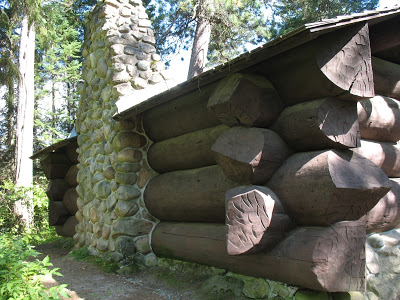 Hiking through bogs on wooden boardwalks, slapping mosquitoes, hypothesizing which “leaves of three” to avoid, we explored an Old Timer’s cabin, whose round planks stacked four or five broad  pine trunks tall. Piling twelve-cousins onto a stool, the dusty sweaty kids laughed and made faces at the camera. I snapped furiously, trying to capture each smile and smirk. 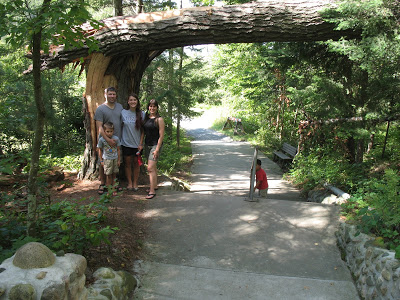 After the 1930s cabin, half of us took a new winding curved route back to our cars. The path narrowed quickly, filled with slippery boulders and wet dirt in the shade, and crossed by garishly-twisted and snapped trees, felled in the storm a week earlier. Giant red and white pine trees trailed the ground, their splintered white insides gaping and exposed.

“This seems much longer than a mile,” we panted, “Is it two?” We wondered if we had gotten lost on alternate hike paths. Eight year old Daniel and his short-legged five year old cousin huffed and panted alongside us, their small legs trekking a longer trail in proportion to us.

“You can do it! We’re getting closer,” I cheered them on. Swooped up into his dad’s arms, my nephew laughed and gurgled as he bounced on his dad’s shoulders. My brother-in-law put foot in front of the other and plodded on, his son’s legs sticking out from his left shoulder, arms extended on the right.

Four adults and two children, we hiked in hot sunshine, passed ferns, carnivorous pitcher plants, and towering pines. A blue lake sheened in the heat just out of reach through the trees, and then we were at the end. In the parking lot, our small group grinned wearily, gulped cold water from a metal park spigot, and rejoined our extended family.

The week passed in beautiful rhythms. Loons warbled in the night, raccoons rustled and grunted as we lay in sleeping bags nearby,  and we tip-toed shy feet to bathroom breaks in the night, hoping to avoid bears. Early mornings brought hot coffee, scuffed muddy knees, and boy snacks by the dozen.

And somewhere in between the bonding and the kissing over the board games, words sliced fast. The fights are never about anything important, are they, these husband and wife disagreements? There were two ideas of how to cook chicken shish-kebabs, and multiple ways of expressing it. We bombed that. He said, she said, and then both of us were red-faced and hot at the wood fire.

Later in a patch of grass off to the side, we offered quiet apologies, explanations, defensive hurt feelings and hopes, but angry words splashed warm again. Walking away to wind down, we finished supper, speaking civilly to each other, but knowing that more effort was needed.

Behind a zippered tent, I prayed with my eight year old and pulled his sleeping bag and blankets high. “I love you, bud,” I murmured close to his soft forehead, breathing in his scent and kissing him. We talked for a few minutes more and then I pulled out my Bible and scooted to a far corner of the tent to read silently nearby as he started to fall asleep.

My bookmark saved where I had left off, and I resumed reading with a shake of my head. “Very funny, God.”

“Bear with each other and forgive whatever grievances you may have against one another. Forgive as the Lord forgave you. And over all these virtues put on love, which binds them all together in perfect unity. Let the peace of Christ rule in your hearts, since you were called to peace. And be thankful. Let the word of God dwell in you richly… (Colossians 3:15,16a).”


I could feel my heart softening and my breathing deepening. Unzipping the tent and slipping out, Mark and I found each other and talked, faces closer, apologizing, choosing soft tones, and starting over each time. We grinned and kissed again.

And I love that about marriage. Sometime it’s like addictive smores over a woodfire and other times it’s like a muggy hike through the woods that feels longer than you expected. At those times, our God can swoop down, whisk us up, and carry us until we get our second wind.

If you’re not receiving my posts by email, welcome. Simply enter your email address in the box under my bio in the top right of the page. Don’t miss an article and be part of any special invitations too!