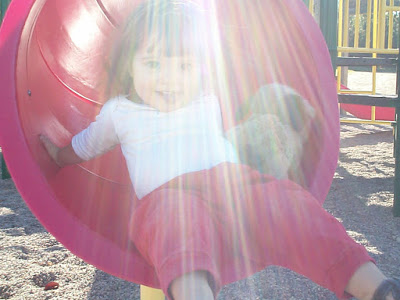 The Stranger at McDonald’s

Two brown-eyed children with curly black hair stepped apprehensively closer to the indoor playset, their curiosity drawing them nearer. They craned short faces to the ceiling, watching my son’s hands bob and wave from various corners of the labyrinth.

“They’re afraid,” said a woman’s voice behind me. “He was born premature, only five months old. He just slipped out of his mama, my daughter. He had a lot of health problems,” she told me, long black hair falling straight around her shoulders and down her back. “His mind is like a three year old’s and he can’t see very well. No depth perception, so he’s afraid. What to us is only a few feet looks like it’s very far away, so the tunnels scare him.”

Her grandchildren sidled closer to the steps leading up, and then pleaded for their grandma to join them. She grinned and padded up the winding stairs on her hands and knees. Fearful wails and shuffling sounds marked their path through the right side of the playset. Concerned for them and wanting to help, my seven year old Daniel called out cheerful hello’s, waved his hands, and sent comforting messages echoing down the round hallways and intersections.

When the fear had loomed too large for too long, the three of them wedged around and made their descent, the grandma laughing gently and encouraging her grandson through his tears.

“Good job!” I cheered her as she emerged. “That’s brave of you to enter the tunnels. Were they claustrophobic?”

“I’m Jennifer,” I continued once she was settled on the ground again and her kids were busy playing.

She shared hard things, and we talked of alcoholism’s grip and the sadness of watching loved ones spiral deeper into fear and darkness.

“The ache is gone,” she said in response to a question I asked. “It used to hurt a lot, but now I just pray for her and care for her kids, knowing God loves her too.”

We talked, Pam and I, in the McDonald’s playland, as a Hmong dad and kids entered and ate ice cream cones by the window. Five children ran through, past, up, and inside, and we talked about God’s deep love, his ability to bring transformation and hope, and then we stopped and prayed.

Our smiles, as we parted, shared a sense of community and camaraderie, this stranger at McDonald’s and me.

Sorry. No data so far.