A Joy and Peace That Bubbles Up and Pours Over 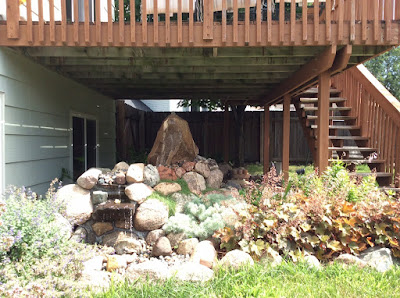 In relaxing melody, water tumbles in endless waterfalls in the fountain below me. A green and orange recycling truck rumbles buhBUM buh,  buhBUM buh as it stops by our house. Glass knocks against glass. He drives a house or two away. BuhBUM buh, buhBUM buh and then silence with a hum as he exits our neighborhood.

"Shout with joy to God, all the earth!
Sing the glory of his name;
make known his praise glorious! 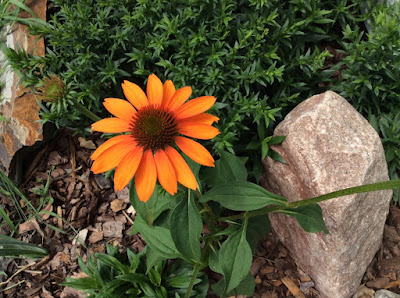 And I feel it from bare toes curled on weathered deck planks to my relaxed shoulders in the shade, how this pausing to see and say wholeheartedly, "God, you are good! I announce it, proclaim it, stop to truly see and say it: You are good. How awesome are your deeds." -- how it floods me in quiet peace, contentment, beauty, the joy soaking in. Breathing in deep and slow; my muscles are relaxed. 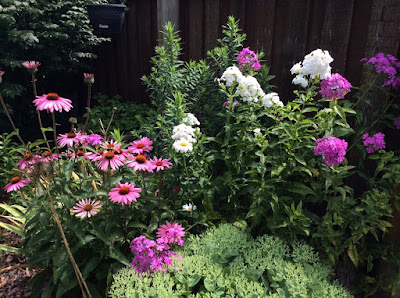 Life and light radiate, pulsing in green and yellow beauty. Water trickles, the cardinal says it again and again. Bree? Bree? chur-chur-chur, tl, tl, tl, tl, and I announce it in kind.

How wise of our Creator to know that in this stopping of the frenetic pace of life to see him and his artistry, to savor it, receive it, bask in it, and then proclaim it in grateful thanks -- that this way of life leads to the greatest joys and a contented peace of mind.

Scientists agree, calling it a grateful way of life, citing it here and here, but our God initiated it simply: "Say to God, How awesome are your deeds. Shout with joy to God!"


If you are not receiving my posts by email yet, welcome. Simply enter your email address in the box under my bio in the top right of the page. Don't miss a post and be part of any special invitations too!

Posted by Jennifer Dougan at 12:59 PM 6 comments: Links to this post

I've been mulling it over -- this line I saw recently and can't remember where.

Mulling it over while dragging sprinkler hoses across hot grass lawns, while driving kids to appointments and swim lessons, and every time I curl up beside family and friends while stretching summer long. Iced coffee cubes crash against condensed glass, dripping summer's heat across bare legs.

And the audacity of it lingers in my brain this week. In moments and days that crash by, dripping lost to the ground, this claim that we can choose, can order, can decide to step fully into each moment and to control how we live our lives is brash, bold.
I love it, and the science of atoms flashes to my mind. In a textbook years ago, I read about the wild, intricate behaviors of protons, neutrons, and electrons within an atom.

Inside the nucleus is a flurry of activity where protons and neutrons exchange tiny particles called pions in a frenzy of energy. Electromagnetically, like charges repel each other. Protons, as positively-charged aspects of the atom, should repel each other, like same-sided magnets do. Yet, mysteriously, they don't.

Bewildered scientists wondered for years why the protons' positive charges didn't repel each other and explode. They knew there must be a strong force holding everything together, but didn't know what. Experiments and observations hinted at the existence of this strong force, but not much was known until the 1930s and 40s, when scientists confirmed the existence and nature of this strong force, the strongest force in creation.

Do you know what thrills me about this force?

This strongest force in creation, this strong force that overrules normal magnetism and is stronger than gravity... this strong force in science reminds me of the Three-in-One God. Protons and neutrons are huddled so closely in the nucleus of the atom because they are giving of themselves.

Want to live the life you're hungry for? This strong force, this endless breaking and making and giving...

Who knew it was modeled in pions deep within atoms?

If you are not receiving my posts by email yet, welcome. Simply enter your email address in the box under my bio in the top right of the page. Don't miss a post and be part of any special invitations too!

Posted by Jennifer Dougan at 3:52 PM 4 comments: Links to this post