Burying Our Inner Critic and Censor

"The footprint of the house looks small for all the living we did here," I remarked to John, staring down into an excavated basement cavern.

"I was thinking the same thing," he said, kicking a clod of dirt careening below. Mounds of soil flecked with green shingle bits slumped nearby. My mint patch grew hale and green, unchecked by the demolition.

Daniel stomped around the perimeter, stopping to smash occasional dirt chunks or peer cautiously into the hole. Just a few days ago, when first seeing the destroyed house, he gaped in surprise with all of us. Speeding by it after the intersection light flickered green, my daughter had snapped grainy cell phone photos, and we had all craned our heads to follow the pile of house as it passed through each window. Cars lined up behind us in the turn lane so we could only stare through the twilight as the pile slipped out of sight.

"I'm too sad to cry," Daniel pronounced solemnly as we turned up Fraizier Street and away from the scene of our former home.

Having only left there three months ago, we still smiled nostalgically each time we drove past it. Quipping, "There's our old house," we'd let our eyes trace possessively the hills, four pine trees, drying sunflowers in the garden, and familiar yellow and green siding and trim.

Sunday afternoon, Daniel, John, and I were there in daylight to study the scene and say goodbye.

"Hey, I recognize that rock," John grinned as I stooped to retrieve a blue boulder from where it used to prop up the ribbed gutter behind the garage.

After greeting our neighbors briefly, my boys headed to the car. Darting from the vehicle suddenly, I raced to my patch of mint, still growing strong. "I need to harvest some before the snow comes tomorrow."

John shook his head and ducked his tall frame into the car.

Sweet crisp spearmint crushed in my hands as I tore it off bushes I had planted two years ago. Tall gangly stalks bounced and bobbed in the movement and the autumn wind. Yellow dust scattered.

Climbing into the car, laughing sheepishly yet oddly defiant, I dumped the mint leaves onto notebook paper in the front seat and fastened my seat belt. John put the car into reverse as he backed out of the driveway. "That's right. I had forgotten how hard this driveway was," he said, looking both ways at fast-incoming traffic. We paused.

"Look at all the gopher mounds," he laughed, shaking his head, remembering my battles.

I quietly said goodbye as we drove west on Ball Road: goodbye to the invisible yellow house, to the two yellow maples out front, the four pine trees standing guard in the west, and the dried sunflowers hanging drooped heads low in the back.

And we pulled onto Lexington Avenue and drove south. Leaning in to smell my mint, I blew unconsciously at the dust coating the leaves. Scattering instantly across the car, making John cough, dust from our house floated in the air. 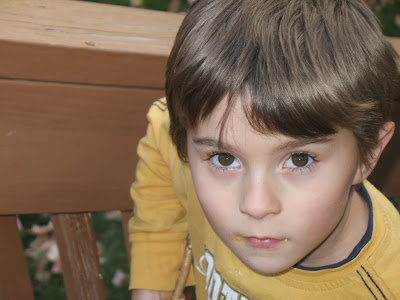 My six year old's words held power and strength this week. In freedom, he sieved through his emotions, naming them as they bubbled up, and releasing them aloud. Knowing that goodbyes to people, places, and seasons is vital --and dangerous when squashed-- I am listening as he speaks and affirming his feelings. Nodding my head, I let him know that it is okay to hold both grief and joy, both nostalgia and excitement, gratitude and goodbyes. Resisting the urge to censor, educate, or reframe his feelings or expressions, I free him to put words to his emotions.

Dancing in the sunlight, yellow dust particles swirled near the car vents, with the sweet smell of mint mixing in.

Posted by Jennifer Dougan at 5:37 PM

Progress need your house? I think your son says it best. I sort of see this world as the same. One of these days I'm going to say those same words and I'm outa here. :)

Children have a way of saying just what everyone else wants to say but don't. How wise of you to let him express his feelings!

We've been in our new house a month- it's still not "home" but it's getting cozier each day.
we too drive past our old house, it's hard not to think of it as ours any longer.
But we feel so blessed to be in our new house and I trust that soon it will feel like "home".
One thing God is showing me is that my home is wherever my family is, it's not in a structure. And I'm finding much comfort in that.

It's hard letting go. And those kids of ours say exactly what's in our hearts too. They are just brave enough to give voice to their emotions.
We will be moving into our new home next month. I'm looking forward to having our own home again and making it our own. You really can't do that when you are renting.
Are you all settled in your new home?

That little one of yours is going to be a wise man. Then again, why not… it's his inheritance through his parents from God.

It's valuable to face the things that we could easily ignore… because that would be temporary. Standing in the face of it and staring down and making sense of it all, or trying to is sound living.

Love the word picture, felt like I was there.