How Not to Bomb Your Own Bonding Family Moment 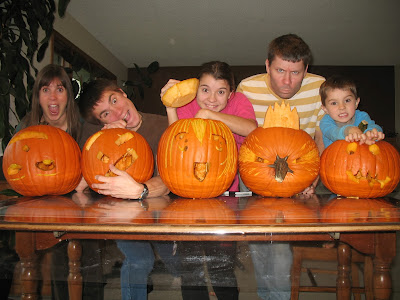 How do you carve out time for family, without it ending messy and broken?

It was one of those mornings.

We had planned all weekend to spend some family time carving pumpkins. Saturday's cold rain stole our motivation to purchase pumpkins. Sunday raced by with a bevy of teen friends over: guys playing games downstairs, and teen girls griddling panini sandwiches and heading out on shopping runs. We pushed off the pumpkin carving until a later time.

This morning was it-- our last chance to carve pumpkin faces as a family before John headed back to college. Now in the crunch of homework, class deadlines, and approaching work shifts, time was quickly disappearing. My husband and I exchanged words. Mine were fairly cross. We tried again, apologizing softly.

"I want to disagree correctly," I said wistfully. He agreed, and we started over.

He drove away to buy five pumpkins, and I finished reading science with Morgan. On his return, we pitched in to help carry pumpkins up the stairs, and plopped them laughingly into the bathtub. Joking, the five of us chose our pumpkins, washed off any mud, and carried them to the table.

Peace and warm laughter descended on the scene then. Morgan put on worship music in the background. We dried damp pumpkins, stared critically at the bulbous squash, imagined faces, and set to carving.

"Can I cut off the top of your pumpkin for you?" my man offered protectively. His gesture touched me, and I gushed romantically. Our kids grinned and rolled their eyes. Condensation washed black marker faces off the littlest one's pumpkin, and he wrote it on again. We gathered pumpkin guts in one large bowl, and the seeds in two others. Then I raced away to work, and my kids returned to schoolwork. 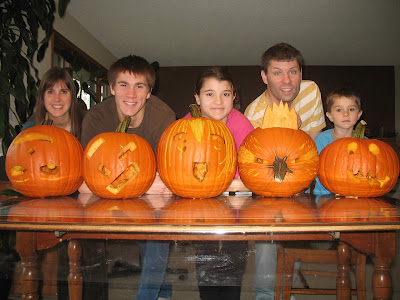 "Can we put fire in them?" my five year old asked me tonight, as I put away groceries and lined up supper. The pumpkins waited calmly for us on the table.

"Yes, let's do it!" I agreed, scrounging for candles and a grill lighter. We lugged the heavy pumpkins downstairs, set them on the front steps, and fought the wind to illuminate them.

And those pumpkins? They had looked nice on the table all afternoon, creatively carved, but it wasn't until the fire had been lit in them that they really shone.

And me? I can pull myself together and look okay some days, but it's not until I fan God's flame inside me that I really shine. He's the one that looks good. 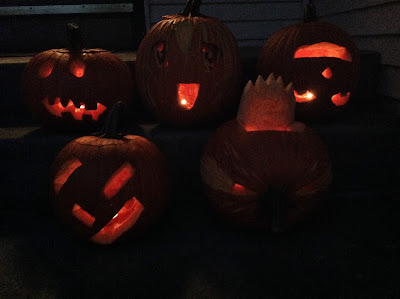 I love hearing from you. What helps or hinders your family times together? What do you do to protect those times? (Those in email can click here to join the conversation.)


Posted by Jennifer Dougan at 7:57 PM

What a treasure you have. The pumpkins look great. I do miss carving with the kids. We also did ours on the front porch. Never failed that somewhere in the yard we would find a new pumpkin plant growing the next spring. Love the part about letting your light shine through. Also a great lesson for kids.

Awesome analogy! It really is a struggle to use our free will to do the right thing. The enemy uses our senses against us. That's my fight as well, to disagree with respect... Good one! Thanks for the encouragement.