Build Your Arsenal of Presidents' Trivia 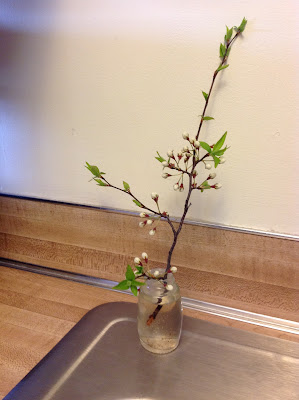 New life bursts.
From a late-night walk with my oldest, a sprig of tiny green leaves and white balled blossoms now perch in a bud vase on my kitchen sink.
In the living room my teens stood, taking turns with verbal presentations on American presidents. The assignment was to research, memorize, and regale us with information on four presidents, their dates in office, and an interesting fact about each of them.
“George Washington, the first president, was in office from 1789- 1797. He was the only president who never lived in the White House." My oldest stood broad-shouldered and tall, switching eye contact between his dad, sister and I. "Thomas Jefferson –president from 1801-1809—didn’t care for the White House very much due to the fact that his designs for [the architecture of] the White House weren’t picked. [He had submitted plans] under fake initials.”
Husband and I listened from the couch, inserting cries of fascination throughout the deliveries.
“Millard Fillmore –the thirteenth president—from 1850-1853 – his wife started the first library in the White House. Mom, I thought of you,” son said with a smile and a glance.
On daughter’s turn she stood at center stage, swiping her hair behind her ears. "Okay, Ruther B. Hayes was the 19th president, from ….1877 to…1881.” Memory jogged to the answer with recognition and quickened speech.  “He was the first president to put a phone in the White House and his phone number was One.”
Our family laughed in delight at this bit of trivia and the thought of just one digit in a phone number.
“James Garfield was in 1881 and the 20th president. He was only president for four months before he was shot at a train station. He died several months later,” she said soberly.
We learned more. About Grover Cleveland who was forty-four years old when he married a twenty-one year old woman; and William Taft who was six feet two inches tall, weighed more than 300 pounds and who loved to relax in his huge tub. He was also the first president to own a car, and he switched the stables into a garage.
Sunshine splashed across the kitchen table. Life budded and grew. The teens stood tall and spoke comfortably, remembering the info they had memorized. After applause from us and compliments, they ambled off to their next assignments.
I plopped onto my husband’s lap. “Pray with me for this house showing, will you?” I asked. “Pray that our house would sell quickly and smoothly, please?”
He grinned and kissed the back of my head. “How about if we pray for God’s will? He knows what we want.”
“We’re allowed to ask him,” I burst out. “It says to ask him, and to ask again. We’re allowed to.”
Arms wrapped around me, he prayed, seeking God’s will and timing on our house that’s been on the market for eight months, relaying my request and calmly leaving it in God’s hands. I leaned back into him, sinking into that strength, relaxing from the scurry of home cleaning.
An hour later, we pulled away from a sparkling house on our way to the park for an hour. Birds sang, the wind blew, and I counted gifts. Life grew and bloomed.
Linking with Ann, Shanda, and Michelle today, I thank you, Abba for:
-teens and their memory recall abilities
-fascinating facts about presidents
-laughter
-a preschooler’s kisses on my arm
-showings on our home
-a husband calmly praying for God’s will and allowing me to be the daughter running to her Abba with requests on her lips
-life growing and bursting forth from plants, teens, me
Hi friend. How has your day or weekend been? Or pass on your favorite bit of presidential trivia.
Posted by Jennifer Dougan at 6:42 PM

Reading this post caused me to try to imagine my house with teenagers in it. It's tough. Great stuff about the presidents, and sounded like a nice family time. Oliver recited a memorized poem for Lon today, but Oliver lacked confidence. I guess it's a start.

I guess I never asked why you are moving. Do you HAVE to move or you just would like to move. Either way, I know it's hard to wait. We'll pay the price this year for the short sale on our house in Mpls. last year. Sounds like the market is better where you are -- you're getting showings, right? Any word on how it went? Hang in there. God does have a plan.

Thanks for linking up with me, Jen!

Oh, I pray that your house does sell quickly. I remember well the days of having to be ready to show and having everything clean and picked up. it is no small tasks with kids in the house.

Having teens is such fun! You'll love it. Of course, each stage is fun though. I'm enjoying having a three year old too.

We don't need to move, but we wish to in order to have one more bedroom. Thankful for that.

Thank you! Yes, the toys, the food crumbs... :) My poor kids are getting really good at chasing their three year old brother around before a showing to clean up.

Thank you. How are you doing today?

Hi Jennifer,
I'm doing well, thanks for asking. ;) God seems to be calling me into quietness this afternoon. So, I'm going to go rest with Him and see what He has to say...my gratitudes, a baby boys smile, chocolate chip cookies, a husbands listening, and resting with a Savior! -Blessings girl, Amy