A Family of Pumpkins Arrived Yesterday 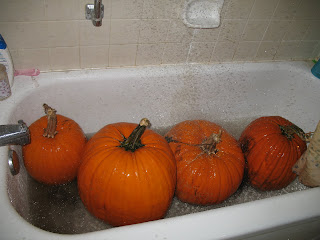 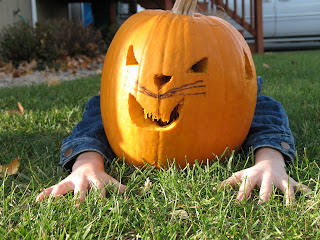 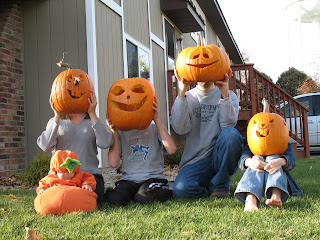 All through school yesterday, we were excited for the afternoon break when we could carve our pumpkin faces. Finally, it was time. School was done, and my husband walked in the door with the pumpkins. What pumpkins! There were four good-sized pumpkins, with two of them being huge! My oldest son (the only son that can talk in sentences yet) gasped and asked excitedly if he could have the largest one. "Yes, take any pumpkin you want!" his dad urged.

Giggling and full of expectation, we chose pumpkins, dreaming of the faces that would emerge, and then saw that they were filthy, coated with black mud. Laughing and brainstorming, we each picked up our orange heads and placed them into the shower.

Much later, our faces were done. My daughter, after sketching several styles of faces onto a green sheet of scratch paper and asking for our voted input, chose upon a "kitty" face. "That was my favorite too," she confided. Hers took the longest, but eventually, all of our faces were lined up outside on the green front lawn. It was slightly crisp outside, so we took pictures quickly, but had fun with several different poses.

Baby D was too small to carve his own pumpkin, so we garbed him in a pumpkin suit and lined him up with us. The hood of the pumpkin outfit kept sliding down over his eyes. Then when we plopped him down next to us for the last few photos of holding the pumpkins up over our faces, he was finally sad and angry. "Let me out," he insinuated. As soon as he was free from his pumpkin suit and was being hugged again, he was happy.

What a fun day!
Posted by Jennifer Dougan at 3:16 PM No comments: Links to this post 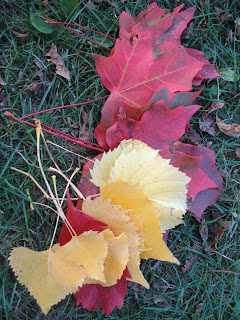 Walking to the mailbox, my daughter and I breathed in the crisp fall air happily, taking in big gulps of it. "Doesn't that smell great, Mom?" she said. I agreed, inhaling deeply, trying to distinguish the various scents in the air. Smoky wood fires, cold fallen leaves on the fresh cut green grass, and an earthy fragrance from the start of decomposing plant life. That combination is one of my favorite smells.

Other favorite smells: wet air and dirt after a rain; my man's cologne; my baby's cheek and hair; hugging my kids.

On a lighter note: my sister and I had fun laughing at ourselves while trying a Latin hip hop exercise class at my Y Friday night. The whole hip rotations of Latin dancing take a while to learn. We laughed while working out for an hour, and then popped into Caribou for coffee and conversation 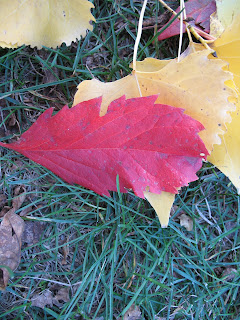 Bobbing Bottles in an Autumn River 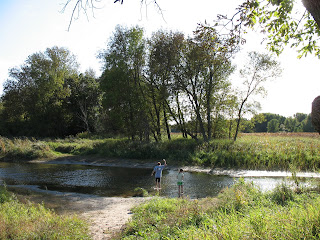 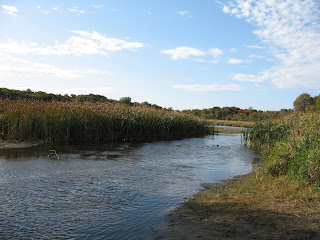 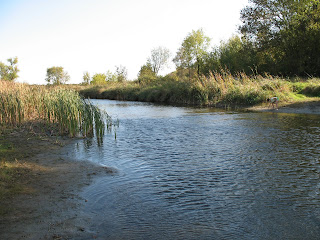 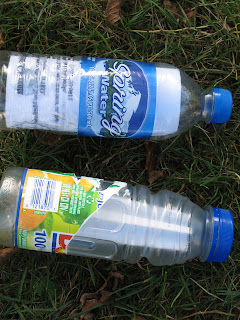 Yesterday the kids and I walked and rode bikes out to the river. My daughter had just read about Matthew Maury, the father of oceanography from the 1850s and his research to chart the paths of the seas. Maury's method was to drop bottles into the oceans, then note where they turned up later, learning more about ocean currents, wind patterns, etc.

Not being by a sea, the kids and I decided to track river currents. We rolled up notes into clean plastic bottles. Then, after romping in the river for twenty minutes or so and splashing in the shallow water, the kids unleashed their bottles, wondering who would find them and call us, and where the bottles would turn up.

Baby D and I watched the wind blow the tree tops around, and took turns bravely dipping our toes into the cold autumn water.

Edit: We heard back from someone who found one of our bobbing bottles! It had gotten several miles away. One mystery: it looked as if it had gone against the current?? How is that possible? Still probing that mystery on the maps.... Perhaps there is another smaller stream that we are not seeing on the map that connects that area.
Posted by Jennifer Dougan at 12:59 PM No comments: Links to this post